There are two diffrent meanings about the Mii characters in compairson to the original Nintendo characters in our Mario Tennis Open Facebook group: https://www.facebook.com/groups/mariotennisopen/ (if you’re not member, you’re free to join, we organize tournaments and have rankings for Europe/Australia and North America) and we have to make a decission. I thought a lot about, what’s right and what’s wrong. But sometimes the decission isn’t easy and not the right one for everyone.

So I tested the diffrences between nintendo characters and the Mii clothes and also did a lot analyses with diffrent stats and looked how the balance changed. Then I found an item calculator here > http://docwatson.net/mario-tennis/which really gives you insight on the stats. Here you can compare 4 characters at once (or open even more windows). 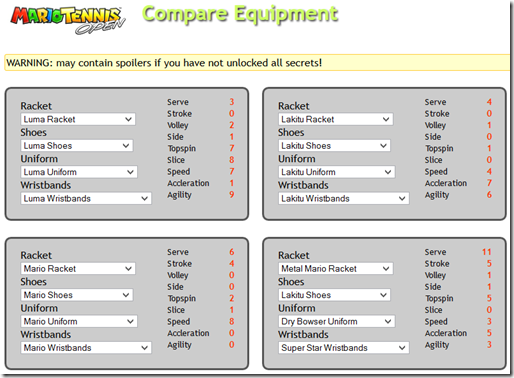 As you see, there are diffrent kind of powers which come with the Nintendo characters. In the right under corner I also combined the powers of diffrent characters to see, how the stats will change. In the left under corner I took Mario, who is an alorounder. But these are not the same stats as from the Star Mario. You get them, if you put the Mario costume on. Then the stats will increase for about 10% if you put the costume on. But then you will lose all the items except the racket:

Mii with Mario items and without costume 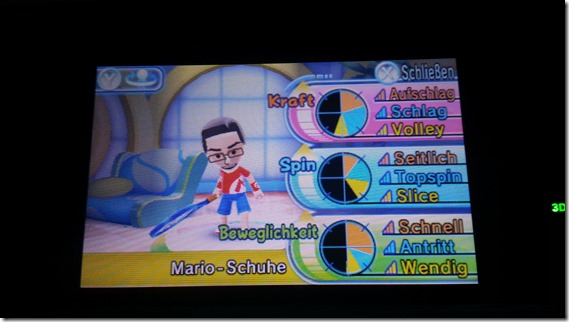 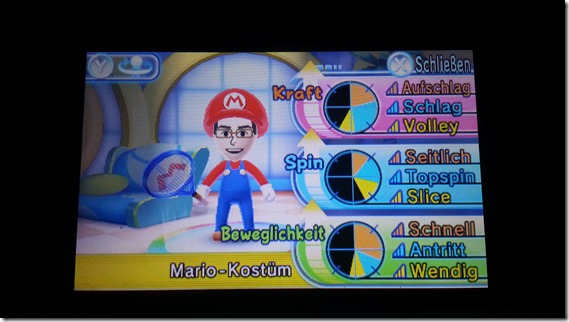 That means: If you try to combine items from diffrent characters you won’t have the best stats of a Nintendo character in his best category, because you lose the extra costume bonus, which you only will get, if you take the same racquet + the fitting costume.

I also made some tests with Peach in 4 diffrent combinations and played against Ace Star Daisy.

The controlling felt very the sameas with Peach including slices, serve, top spins and drop shots. And trust me, I played with these character for a long time.

Comparted with the Mii, where I chose some of the best items in every category:

11+5+1+1+5+3+5+3= 34 the Mii even gets less power then the Nintendo character – and this WITHOUT costume bonus. If you look at Mario, he’s got 6+4+2+1+8=21, but here also WITHOUT costume bonus. But I think, you clearly can see, that even the Mii with Lakitu shoes has a less speed with 3 than Mario (still without costume bonus) with 8! Now if you add the extra bonus of 2 to each value, where points are to Mario: 21+10 (for each of the 5 stats Mario has 2 added) you will get 31 which won’t be that far away from the Mii. With other Nintendo characters you can get even much better stats than with Miis (Dry Bowser 38, Boo Wario 34 too).

The stats get automaticly balanaced with this and you can’t really be better in each category with a Mii comparted to the best categories of the Nintendo characters. It’s really also a choice of playing style. For example Peach has a lot lesser stats (16) than Luma (36). But my playing style doesn’t fit with Lumas stats – so I play better with Peachthan with Luma. A “side” stat of 0 can also be really helpfull for example. 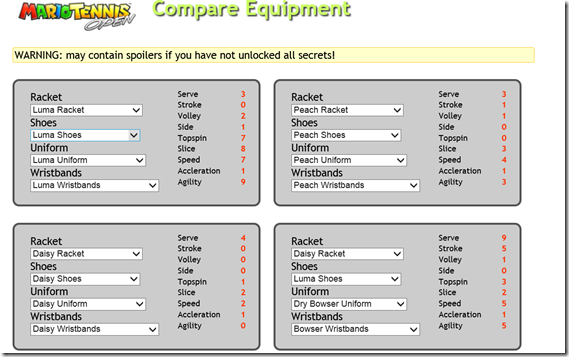 And here http://imgur.com/a/FLNaeyou will find an overview of all items.  I also found out, that diffrent configuration of the Miis from the Mii menu don’t have any effect on the basic stats.

And what the range of the “ball catching” belongs, you also can see the following: If you change your character with a costume, you will see, that the arms will changetheir length and that also would change the range – even with Boo when you can’t see it by your eye, but the range will probably be the same.

So my opinion is, if you use a Mii with combinations, you can get a better balance, but your characters won’t be better then Nintendo characters in their best catergories. And using Miis won’t make you a better player.

The using and experimenting with the Mii and the items is open for all - especially with the calculator, so I think it’s up to you! If you think, you can play better with a Mii – then you are free to try! I won’t forbid it! And if you think, you play better with a Nintendo character, then just do so! Everyone has the same possibilieties to find out, what matches her/him the best.

So, yeah, that’s basicly my opinion. It was really important for me, that I don’t just say “okey, it’s probably like that, we forbid using Miis” but to really make tests and find out, where the truth could be. But if you still say “it’s still not fair, we don’t really have the ultimate prove for the original stats”, I would set one of these rules, if both players want to use the same Nintendo character:

- Both players play free the costume of your favorite Nintendo character and only use these for their match. That’s probably the fairest way to decide the match, because both players would have the same stats, which are the same as the originals or not wide from the original.

- The other possibility would be, that you both change between the Mii and your favorite Nintendo character. But the final set would be decisded between Miis (Mii vs. Mii).

But I wouldn’t forbid Miis completly, because it’s a part of Mario Tennis Open, which gives you the possibility to experiment and to find your playing style. In real tennis you also can’t say “Federer is good in nearly every stat, so he’s not allowed to play Tennis”:). Defining a main character and even a second and third character also wouldn’t really be a fair thing I think and it also would make the system more restrict and complicated. This also allows that everyone tunes their stats and really find the perfect style for her/himself!

Mii vs. Nintendo character IS NOT unfair! It’s a question of your own playing style and everyone can experiment for her-/himself what fits the best. Everyone has the same possibilities! Experimenting with the items and the characters is also a part of Mario Tennis Open and also brings individuality into the mtaches. So find out, what’s the best for you!

So, tell me, what do you think and which rule do you would prefer. I also will make a poll on it. Thank you!